Word choice greatly affects a reader’s takeaway from any given piece of writing.

The short stout man and the big hairy dog went for a walk in the large dark park behind the small purple house.

After supper, the tubby man and the massive Husky went for walk in the park behind the house.

The fact that the park was large and the house small is not key to this sentence, so they can be done away with or revealed in some other way in the story. What matters is a man and a dog went for a walk in a park. Since the darkness might play an important part, the author indicates the time of day for the walk (after supper), which implies evening and darkness.

“Fervor” is defined in the Merriam-Webster Unabridged as “intensity of feeling or expression: passion.”

Most Americans have read the classic Dick and Jane books. While they are useful for teaching children to read, they are pretty bland pap.

After he had swallowed the leftovers from yesterday’s overcooked supper, the tubby mechanic leashed his wife’s massive Husky for a walk in the park behind the house.

Here, we get some impression of the tubby mechanic’s feelings, simply by considering our own, if we found ourselves eating a reheated meal that was poorly prepared the day before. We also ask ourselves why we are left walking a dog that doesn’t belong to us. Is our wife at work? Or merely too lazy to take the dog out herself? Is our wife a bad cook? Or are we to blame for this culinary disaster?

“Expression” is defined in the Merriam-Webster Unabridged as “felicitous or vivid indication or depiction of mood or sentiment.”

After he had swallowed the leftovers from yesterday’s overcooked supper, the tubby mechanic leashed his wife’s massive Husky for a walk in the gloomy park behind his house.

With the addition of the word “gloomy”, we get the impression that the tubby mechanic doesn’t enjoy walks in the park behind his house. Perhaps he is only going into it because the Husky needs a walk. He would much prefer to stay in his comfy, cozy home.

After he had swallowed the leftovers from yesterday’s overcooked supper, the tubby mechanic leashed his wife’s massive Husky for a walk in the gloomy park behind his house. That’s where he found his girlfriend’s mangled body.

Now we have the reader’s attention. The tubby mechanic has stumbled across a body. And not just any body. The body of his girlfriend. Where is his wife? Is she the murderer? If she isn’t, will she discover the tubby mechanic’s infidelity in the ensuing police investigation?

Don’t add details to a story that are NOT important, simply to boost your story’s imagery. Unless the girlfriend’s body is under the mulberry bush, there may be no need to wax prosy about its beauty or odor.

Indiscriminate showing is as bad as telling. 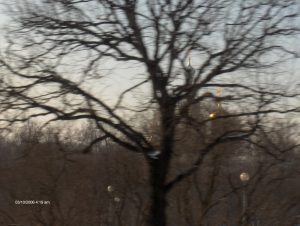