I was reading a thriller from the late 90s (name of novel withheld to spare the author). The villain of the story had two children, a daughter of 13 and a son of about 10. The son, Ringo, is mentioned twice in the novel, but never features in the action.

Toward the end of the novel, the villain’s common law wife urges him to climb into a car with her and their daughter and head off into the sunset. Naturally, the reader thinks of poor Ringo, who the parents (and the author) have apparently forgotten.

At the end of the novel, the author mentions that the villain’s common law wife was sentenced to a certain term in prison, while his daughter was put in foster care. Again, the reader thinks of poor Ringo, who apparently has dropped off the face of the earth.

Useful Lesson learned at the expense of poor Ringo. Keep a firm handhold on your characters, particularly the little ones who play a rather small part. Leaving them behind can leave readers scratching their heads. 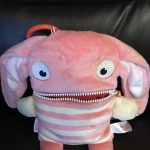