About Beautiful to Behold

Beautiful to Behold [Book One in the Dark Brethren Series]

Sometimes it is better to be hated than loved. Or so twenty-four-year-old Owen Linet discovers, when his older brother, Kurt, extends a hand, offering Owen not only his forgiveness, but also a chance to redeem himself in the eyes of their father, from whom Owen has been long estranged. Far from idle in the ten years since last they saw each other, Kurt has risen to the rank of major in the SS. Ambitious, cunning, and thoroughly conscienceless, he is determined not only to distinguish himself, but also to elevate his “forgotten” younger brother, whose return to Berlin he eagerly awaits and secretly plots to effect, by any means necessary. Though Owen curtly refuses Kurt’s “generous” offer, he knows his brother too well. When Kurt wants something, he gets it, one way or another. But Kurt may not be the only, or even the greatest, danger Owen has to face. Since childhood, Owen has been plagued by bad dreams, or rather the same bad dream, of a man named Hector, who claims to be dead. Hector possesses a strange black cloak on which are stitched a series of golden symbols—“Words” that Hector, their “bearer”, claims have miraculous powers when spoken. He gifts one of these Words to Owen—a Word that, Hector claims, can not only take life, but also restore it. In the dream, Hector, like Dante’s Virgil, guides Owen through Hell, to a door behind which he will meet Death. Owen always wakes before he enters the door. When Owen’s stepfather, an architect, takes a job in Warsaw, Poland, building a new wing to the Polish National Museum, he asks Owen to join him there. Owen agrees, despite some misgiving, hoping the old proverb, “the enemy of my enemy is my friend”, will hold true. He soon finds himself in trouble, however, when an old photograph surfaces, drawing unwanted attention from the Poles, who suspect him of being a German spy. Twenty-two-year-old Polish partisan, Jacek Tarasek, is ordered to follow a suspicious foreigner, a British artist named Owen Linet, who closely resembles a man from Jacek’s past—someone Jacek would just as soon forget. Jacek’s worst fears are soon realized when he learns that Owen is not only his avowed enemy, but something infinitely worse—a devil in human form, with the power to take life with a mere word. When Jacek can’t bring himself to destroy the man with whom he is falling deeply in love, he is forced to confront his flawed understanding of good and evil. Publisher’s Note: Beautiful to Behold is a male-male love story and contains homoerotic sex acts that may be offensive to some readers. 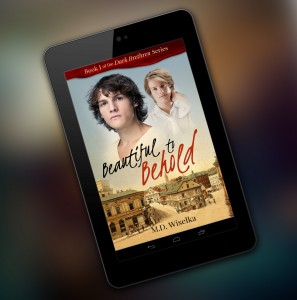