One hundred and fifty years have passed since his crossing, but the bearer, a man once known as Owen Adler, has yet to find a way of restoring himself to the life he lost and the man he loved.  When his great lord and master, Seker, offers him his freedom in exchange for his aid in punishing a disobedient servant, Owen, believing he has nothing to lose and everything to gain, seizes the opportunity.

An Elder bearer called Melek, exiled a century before for an act of treachery, will soon return to his exalted place in Master Seker’s court.  Before he does, Master Seker wishes Melek to be humbled before his brethren lords for his sin.  To this end, Owen, assuming Melek’s guise, appears before the lords of the Hour a humble penitent.  In the ninety days remaining him before his return to court, Owen, in Melek’s guise, vows to prove himself worthy of his office or return voluntarily to exile for another century.

To secure his freedom, Owen must survive the ninety days in Melek’s guise without being exposed a fraud.  No easy task, now he can count, among his many enemies, the offended Lord Melek, a ruthless and vindictive monster who’ll stop at nothing to punish Owen and the ones he loves.

But the greatest danger of all may be Owen himself. To outwit the devilish fiend that would take his life, he must become a devil himself. Even if he succeeds in at last wresting his freedom from his cunning master, will Owen ever again be the man he was when last he held his beloved Jacek in his arms?

Publisher’s Note: Darkness Falls is a male-male love story and contains homoerotic sex acts that may be offensive to some readers. 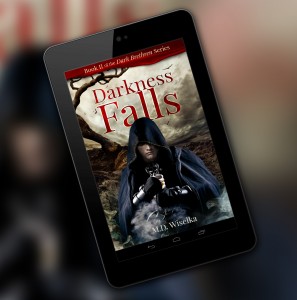